Call me superstitious, but I feel things like the solunar calendar ring true for the prediction of animal activity. It also helps to carry around a vest full of rabbit’s feet, horseshoes, feathers, an abyssinian wish box, etc. What else are you supposed to put into all of those tiny pockets?  It is very hard for me to turn down a fishing trip on a full moon, but a super moon? Well, that would be like missing the birth of your child. Needless to say, my weekend was taken. Early in the week, I had been planning a trip to the southeast facing side of the Jemez caldera hoping for some migrating cutthroats and a bit of fact finding. Plans were moved around a bit when I received a call from Elliot, an old work buddy turned fishing buddy. He wasn’t up for chasing stockers behind dams or risking life and limb for 5-6″ fish in a possibly dry creek bed. Needless to say, a change of plans was in the works. There is always a “Plan B”.

Not knowing what is coming is very risky this time of year in New Mexico. From impassible roads to runoff that easily ruins a good time. Choosing a new location to fish was difficult and I really didn’t want to fish the Jemez river or the San Antonio, or any of the major waterways that people would more than likely be fishing on this spectacular weekend. I knew that I wanted to fish somewhere around the caldera and with around 30 fish filled rivers to choose from, only one came to mind. The Rio De Las Vacas. It stretches from San Gregorio lake, to about 8 miles north of San Ysidro where it meets with the Jemez river. You may know the last few miles of the Vacas well for it’s name when it meets the Cebolla, the Guadalupe.

The trip started out relatively on time at  5:00am after I stayed up way too late tying flies. The anticipated ride up brought an extended adrenaline rush, so that was a bonus. I guess the energy drink helped too. The nearly 2 hour drive seemed a little shorter than what it was due to the giddy adult children exchanging fish stories and before I knew it we had arrived in the mountains. Hardly any snow was left on the ground and to my surprise, one of the feeder streams was only running high and stained. Not the mudslide that I had anticipated. After a short break, it was onward to the water we were after. The water was big, wide, deep(for New Mexico), and flowed snake-like through a wide valley. Perfect water. As we were driving deeper into the canyon, I think I heard “Come Sail Away” by Styx softly playing in the background and I might have shed some tears of joy. Very manly tears of acid and nails, could’ve been allergies though. 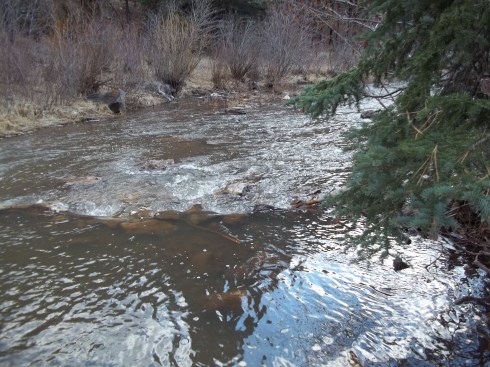 Joe lead us to a place I had not been before and we parked the truck near a bridge and geared up. I had never been fly fishing with more than one person in my life, and because I go alone so much, I’m very quick to the water. The other 2 in the party were not so quick. As I waited, I decided to eyeball some aquatic life.

I was unaware that I tied a bug closely resembling what was hiding under that rock. The previous night I tied a few different bugs. The big-headed black nymph is good for dark and deep or murky water casting a hard silhouette that is easy for fish to find (left). I don’t have a name for the one pictured on the right, but that was the magic for the day. Maybe you can suggest a name for it… The third is a tan goose biot midge (bottom) that I didn’t try due to the success of my main fly. In fact, I didn’t change it up all day. Elliot chose a zebra midge and Joe tied on a prince nymph. Then we were off. 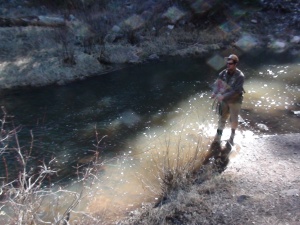 Elliot hooked up with the first fish of the day that threw the hook very quickly. I say it was fouled, because a day couldn’t be complete without Elliot fouling at least one fish. The world just wouldn’t be right. Shortly afterward, Joe landed his first two Browns of the day. Leaving me wondering what I was doing wrong. Then I reminded myself that it takes me a bit to find where exactly the fish are hiding. I stayed back in a pool and our group spread out a bit. Still fishless around the bend, I caught up with Joe and dropped my nymph behind a log that the water flowed over to make a little hole. A twitch from the indicator revealed a Rainbow trout. My ego was boosted and I was ready to get serious. Dropped the line again and out came a second rainbow. Thank goodness I had all of that confidence mustered up because when I chose a safe log to cross that section of river, I slipped on a patch of ice and landed face first. Miraculously, I didn’t get wet. 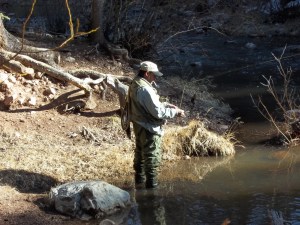 After working around the bend, we became more focused on the proper holes and hideouts for fish. The payoff was great. No monster fish around, but most of the fish were in the range of 8-11″ with a couple 14″ and the occasional 3-4″. 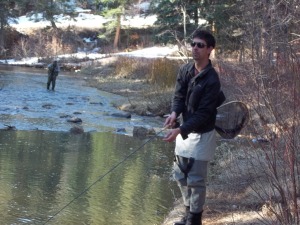 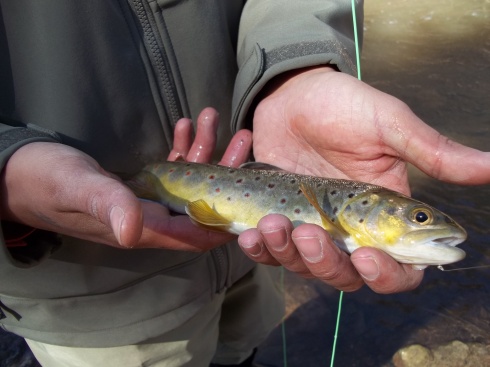 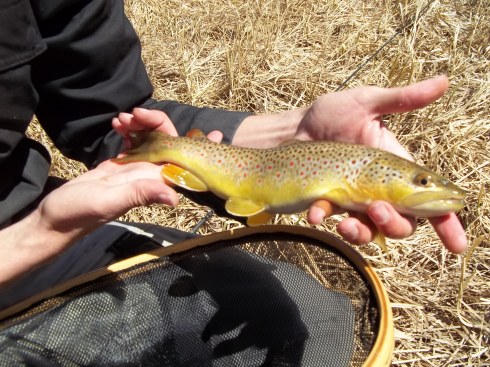 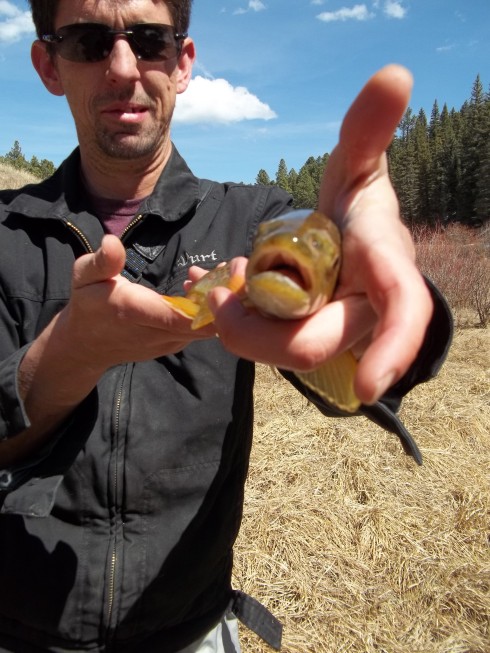 All in all it was a great day. Maybe it was the moon, maybe it wasn’t, but I guess there is no way to figure that one out. Too many variables. It may still be held in the world of superstition, but to me there might be some truth to it. I’m glad everyone involved had as good a time as I did and many thanks go out to Elliot and Joe for the new place and the good company. This was new water to all of us and I’m glad it produced fish for them. To the Vacas: until we meet again.

Lesson #3: If it is cold outside and a log looks wet, chances are that it is ice. Don’t walk on it.

This entry was posted on Thursday, March 24th, 2011 at 9:15 pm and tagged with backcountryfishnerd, Brown Trout, New Mexico Fly Fishing, Rio De Las Vacas and posted in Fishing Adventures. You can follow any responses to this entry through the RSS 2.0 feed.
« Oh, The Anticipation…
A Foolish Culmination of Thoughts »