There are some new ideas bubbling around these parts, strictly in the world of this blog. The debate is on, wondering if I should be posting Sunday evenings. Not actually moving the posting day, but have an additional short posting. About what? Well, I’m not exactly sure yet. I was checking over my stats and found that Survival 101: Water was a complete flop. On the flip side of that, This is a Tasty Burger and It’s a Bird, It’s a Plane were the top 2. Burgers are read about twice as much as fishing. I do not want to turn this into a food blog. What about some fish science? Light refraction and dissipation in water, guanine crystals on fish skin, schreckstoff, UV qualities of different tying materials, fish perception of polarization? Any interest there? I’m not looking to gain extra readers (that is a great side effect though), I just don’t want to lose them. You guys are my virtual fishing buddies and I enjoy that. July marks month number 5 of writing and so far it’s going good. I would like to thank the people that read the blog, you guys keep me going. If you have any suggestions or likes and dislikes, feel free to sound off in a comment below. 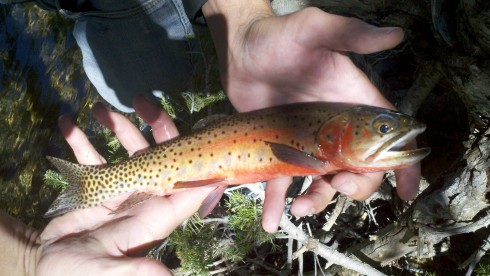 Onward! To the fish! In the previous post, John and I did some hiking in the RMNP to fish some clean water. This time, I wanted to continue that and explore more of the area. If you were up there, you know that there are some trails that are buried beneath 10′ of snow. My destination was beyond that. Bridges were out and flooded, and with the amount of snow, we were forced back into the same water. After catching a couple fish, we decided that the drainage would have to suffice. The wind was awful and the pressure on the lake was growing. Because of the wind and the right time of year, the pollen from the local pine trees did the work of dusting for fingerprints at a crime scene. 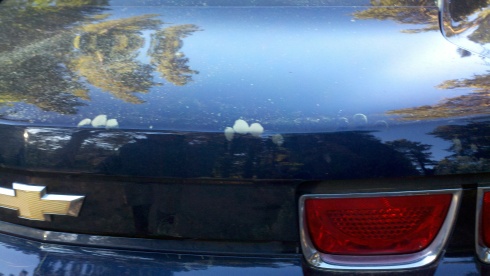 Fishing on the creeks was amazing. So many people have walked along these places that the fish are not spooky and don’t react when you accidentally slap the water. Mostly small, yet feisty browns. Are there bigger fish in here? Sure! Check it out! The only fish we were into were 6″-9″ and too miswired to have their mugshots taken. We had to make one more stop for the day at the Big Thompson. The river was very high and as far as I could tell, it has been that way for a while. Undaunted, we fished. Nothing, not a twitch. We had stopped here on our way up and John caught this…

The more I think about it, the more I realize that there are tons of fisherman in Colorado. Even more than them are the hikers, bikers, and tourists. My search in the coming weeks will be for the unpopular areas of this state. The rougher turf, and maybe the nearly impossible. The rivers will begin coming down in the Platte watershed soon, and that means some water will be opening up to spread us fly fisherman out of one another’s turf. I’m sure it will be bringing some out of the woodworks as well. After yesterday’s heat, I’m sure that this weekend will be busy. After all, it is the weekend of the 4th.

Also, if you glance over to the left, you’ll see a list of writers that you will find enjoyable. Go have a read!

This entry was posted on Wednesday, June 29th, 2011 at 9:47 am and tagged with backcountryfishnerd, Backpacking, Brown Trout, Colorado Fly Fishing, Greenback Cutthroat Trout, High Country Trout, Hiking, Sub alpine fly fishing and posted in Fishing Adventures, Random. You can follow any responses to this entry through the RSS 2.0 feed.
« Battle of the Buggers
The All Night Buffet »

2 responses to “The Suggestion Box”