I hate writing, there is so much I have to learn. Does a semi-colon go here? Is semi-colon hyphenated? Did I spell hyphen correctly? Is hyphenated a word!? Do not ask me what I think a preposition is. If you have ever fished with me, you know how I feel about rules. You know, matching hatches and whatnot. I feel the same about writing. With that being said, there is something about writing. It is not a passion, it is not a love nor vanity, you are just drawn to it. Sometimes it feels like you have to. With that feeling, I think the next phase of writing in my life has begun. Focus. Great writers have something that you just can not explain. I am not saying that I am, I have a very long way to go and picking up a third grade english book would be a great start. No matter the skill of writing (I think I was supposed to capitalize “English”), writing is about telling a story and conveying that story in such a manner that it is gripping. My family and others know me for being the most anti-climactic storyteller alive. It is true, and embarrassing. I can not end a story with power unless I am writing. Even then, I read the draft and think, “Wow, this sucks.”

Prepare your brain to change pace, I hope the picture helped. Habits are hard to break. When you finally notice that you are developing a habit it is too late. Commas are my Achilles Heal as well as boulders that I can sit on in the river. Who would think that commas could be a habit?  Recently, I realized that there is a certain rock on the Arkansas that I sit and think on. Every single time I fish this river, I head directly to this rock and sit. I sit for a period of time watching fish feed near the surface. Waiting for the long black shadows streak across the seams as I pick feeding lanes and flies. Recently, the Arkansas has been releasing its treasure.

On the thinking rock, the past and this page began to flash before me. Two years have gone by and I have sat in this room telling stories to passers-by. Random people who deem my writing good enough to read. Some say that I am a good writer, but at times I do not feel that way. The same feeling came along at times when I was a musician. I didn’t feel as though I was good enough. I heard other guitarists that would blow me away. Ultimately, it lead to the demise of my rock stardom. I felt like I was at the apex of my ability (not the apex of playing guitar). In writing and fly fishing, people blow me away on a daily basis. There are better fly fisherman, better writers, but mostly people better at marketing than I. People that know an industry that I have excluded myself from for years. Upon this thinking rock, a chain of thought and the surface was broken by a fish and a big smile across my face. 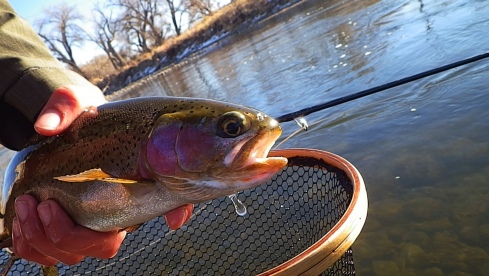 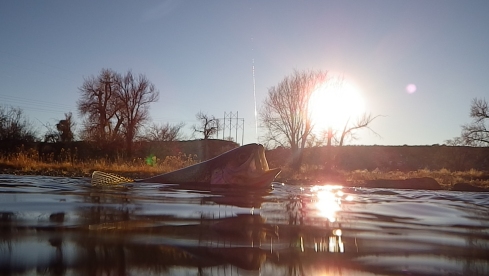 Last year on the Arkansas I have been using different colors of the same pattern. Quite frankly, I have been using that pattern everywhere to some success. The bug today, a cream/brown Hail Mary, a new addition to the color scheme. After catching a few fish out of one hole, it was time to move on down the river to a different thinking rock. A rock that faced me a tad bit northward and on an odd side of a run that nobody really fishes. Watching countless fish rise, my thoughts came back to this page.

Thoughts to this page reflected my attitude about the guitar. I didn’t really want to be known. I wanted to be in the background, to be invisible. I wanted the right people to find me. People who would go out of their way to support my… Well, for lack of a better term, addiction to writing. These people found me. Every comment you see down there are people that have stumbled across this page and deserve that same support from you who read this. We aren’t searching for popularity, it is something else entirely. Maybe we just want to spread our enjoyment to other readers. There is a fine line between people who “write” for popularity and we who just write. The more I thought about it, the more I felt like I was being egocentric and vain. Inner turmoil was overflowing and for a time I just sat on the rock, thinking about things that shouldn’t matter.

What does matter is that I fish, take pictures, and write. The only reason, “because”. For those who may have never known, my name is David Goodrich and I am a fly fisherman. I hope the people who have been reading for the past couple years stick around for a few more. You might get some special surprises. To the people who have promoted and read this page, I can not thank you as much as you deserve. I am ready for this next year.

This entry was posted on Sunday, January 13th, 2013 at 6:58 pm and tagged with Arkansas River, backcountryfishnerd, Colorado Fly Fishing, Colorado tailwater, David Goodrich, fly fishing, fly pattern, Fly tying, hail Mary, secret flies and posted in Fishing Adventures, Random. You can follow any responses to this entry through the RSS 2.0 feed.
« There’s No Place Like Home
Eleven Years to Realize »