This may be the first time I have written a post about a technique used in fly tying. Kind of scary to share knowledge this way here. I do not normally find myself specifically writing from a technical perspective. Dear Diary, I’m not going to get terribly artsy today.

Before you begin reading it may be beneficial to understand when I refer to WEIGHT, I mean it as the application for the purposes of downward force. MASS is a reference to mass applying force and typically forward motion.

Mass is very typically overlooked. Most people use it to get deeper and that is the sole purpose, “cause that is where the fish are”. Although this is true in most cases, it is not necessarily the case for where they are currently eating. A sub par fly will function a whole lot more effectively when it is presented 5mm from the mouth of a fish. Those fish are usually snuggled up to some sort of structure. Trout live in the soft spots with great food sources, bass, in and around lots of different kinds of debris. When we present a fly to these fish, we feel like we should get closer and closer until we bug them enough to eat. It works. However, when you watch the fish you are targeting, it will often move from the feeding zone to eat something else. Not your fly.

Outside of midges, craw patterns, clousers and deceivers, we see a different sort of reaction to our flies (fish dependent). In order to move a fish (bass, trout, pike, musky, carp, etc..) you have to give it something it not only wants, but something it can wisely use its energy on. Two specific memories come to mind with this thought.

The first, when I fished the Blue River in town, the first cast with a black emerger thingy I tied, a 22″ trout shot across the cable hole 30′ to be the first to grab it. I had never seen that happen in a river full of “tight-lipped” trout. The second, an X-tail brought a musky zipping just sub-surface from at least 50′ to eat.

These are two opposing ends of the spectrum, but they both had a reaction in common. What can one glean from this information? You guessed it (whether you did or didn’t doesn’t matter at this point cause I’m going to tell you anyway), they both resembled something the fish was going to eat. Realism. Not in the “wow, that looks like the real thing” to the human eye, but the “Oh my gosh a bear! No, wait, that’s a trash bag”.

If we, with our powerful brain capacity and reason, can not tell the difference between sasquatch and a tree stump, why would we expect a fish to do the same? The same reference can be applied to how some people are unable to differentiate chicken and pork in some dishes. Or when people say, “wow, this vegan burger tastes great!”

I ran slightly off topic, but I feel like you need to know a little deeper about my thought processes of why fish eat certain things. A different approach to realism. Motion. The proper motion in the water can make the difference between a fish laying mundane in a spot and moving far out of its way to eat.

So, where was I? Oh yeah, slapping weight on the front of a streamer kills any motion the fly could potentially gain. Unless, you are only going for vertical motion. You can also get some nifty motion from combinations of front mass and head resistance (a topic for a different day). Today, I’m diving into “Point-Center Mass”. If you divide you hook into thirds, you’ll end up with front, center and rear. Side note: I typically refer to the “head” as the front third with added materials. I definitely want to make that difference clear as they will become very different things. 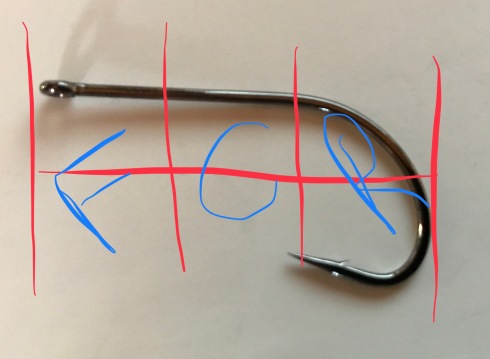 Every hook will be different and we will use this 2/0 Gamakatsu B10S as an example. 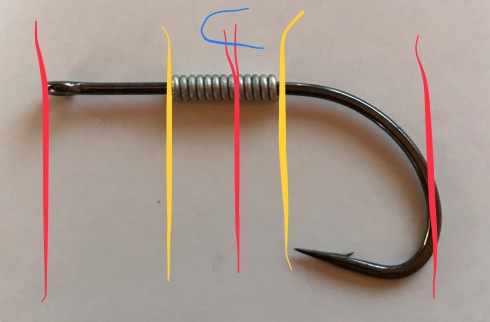 Point-Center Mass starts from the hook point and travels into the front third of the hook but is slightly off of true center depending on the hook. In this example, .035″ lead-free round wire is used to get the proper weight.

The mass distribution in every hook is different, especially in terms of mass around the bend of the hook. This should be taken into account when figuring weight distribution. In the case of this B10S, the bend starts early and is (when straightened) 1.5ish times the length of the shank. Weighing roughly 800 milligrams in total, that means the bend weighs roughly 500 milligrams. Exact numbers do not matter, but knowing roughly where you are can make a great deal of difference. Does that mean you should you buy a scale and be put on an FBI watch list? Probably.

The full idea behind Point-Center Mass is to add mass between the point and the eye of the hook to further balance the end product. Although it is one of the more complex aspects of design, it is the most simple in terms of application and has very broad coverage of different flies. You can put nearly anything on this hook and it will do exactly what you want. Essentially, you are adding the weight of the bend again into the center third of the hook. Your weight distribution in thirds from front to rear is 150-500-500 milligrams. If the weight ends up being over the point, you are adding unnecessary mass to the rear third. The transition when adding weight from the point forward is smooth. When you look at its distribution in terms of numbers, you’ll notice that the front is light. This is when it gets interesting (as if it weren’t interesting enough already, amiright!?).

When the head is light and creates a lot of resistance, the resistance slows the head and the mass behind the head tries to catch up. A lot like slamming the brakes in your car and the rear tires lock up. Your car will turn backward. But, when you add a tail, (depending on the materials) it will calm the swing of the fly and tighten the swerve. When the weight shifts, a magical thing happens. The mass continues pushing and, because it is so close to the head, the fly rocks back and forth when no force is applied by the act of stripping. The motion continues slightly even when force is applied. Giving your fly realistic mimicry of a fish and prolonged motion when you aren’t working for it. In most cases, this will make a fish move from anywhere it is at to eat. Some flies are great on the strip and terrible on the pause and some opposite of that. In those cases your fly is only working half of the time. If you increase the effectiveness of both types of motion, you double your total time on the water.

Try point-center mass techniques in your favorite single hook, non-articulated flies. A couple great ones for the technique are Dahlberg Divers and Bohen’s Buford or even Zimmerman’s Stuntman Eddie (you’d have to break some rules though). Not to mention my Laser Yak. Go crazy with it, the simple rule is making a fluffy head. 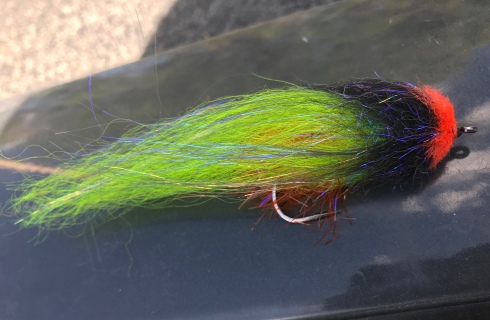