Hopefully it is widely known enough that Gila trout are located in the Gila Mountain range surrounded by the Gila National Forest. If you were one of the people trying to keep it a secret, I apologize for dropping the ball. You can also blame ESPN Outdoors and Field&Stream and countless other magazines and TV shows for doing it in 2008. Here I am in 2011, doing it again, stating the obvious. You can dig through countless studies on the Oncorhynchus Gilae Gilae and try to find more info on these guys (ongoing for over 50 years). Be sure to check out NMDGF to get your permit and more details on where to go. Also, if you turn to Wikipedia it will tell you that they average 11″, be sure to check that reference because it will tell you that they grew to that size on a test area in Colorado.

Isn't there supposed to be a giant snow fence?

I had been studying the crazy weather patterns and there was a window of no wind or snow down south in the Silver City area. This was my target destination. Some of the coolest landscape on the planet earth. Driving south it is almost like you are driving from New Mexico to the bad part of Wyoming to a part of Colorado that is similar to the landscape on the Blue River north of Dillon. Did I mention that I love this state? The worst part of this drive are the dirt roads coming in. I’d really suggest a small truck.

Within an hour of my arrival, I had already started the back country ritual by falling off of a burned log into a pile of rocks and through a thorn bush. The largest part of the injury was to my hip (not pictured for obvious reasons). Despite the injury I pressed on. The water was extremely low and clear. Lots of feeder creeks were dry and the fish were very spooky. It is hard to lay down a 50′ cast when you have lots of vegetation covering the best holes.

It is better than being impaled...

I could even see fish darting around in the pools when I was hiking the trail. I could tell that catching the Gila was a bit more than what I bargained for. I am very adaptable in these situations and it isn’t a strange occurrence to see me crawling on my hands and knees to get to a good hole in the back country, but in a military low crawl? This was my first time laying on my belly for fish, a very humbling experience I might add. It payed off and in no time I was into the 3-5″ fish that resided in the area that I was fishing. One thing very noteworthy here, know your fish in the water. You will see some monster sucker fish, but do not confuse them with trout. It is my assumption that due to the number and size of the suckers, the trout are forced to be dedicated surface feeders and that is why they are small. This river is perfect for fish and it is only missing one thing. Water. Huge bugs everywhere! In this picture there are 3 golden stoneflies and a ton of other bugs, including some sealed caddis cases, and some other undefinable ones. 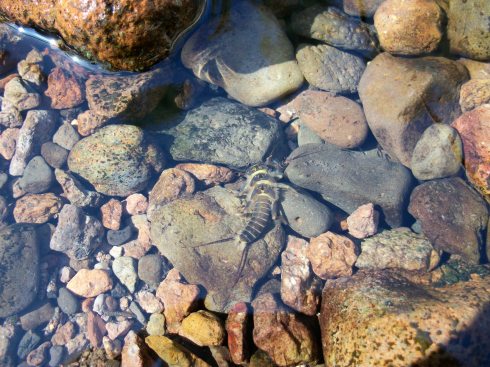 This picture is roughly 4-5" across

Throwing a giant golden stonefly nymph was a very bad idea for these conditions, so I stuck with the caddis, a foam-back version that payed off more than a few times in Colorado and New Mexico high country. Rule: That which catches brook trout and cutthroat trout on the surface in the same day shall be added to the fly box. Let us get one thing straight, wild trout are very gullible but difficult to find and exceedingly difficult to bring to hand.

This monster of a fish (you can’t type sarcasm) is not actually a gila, but it represents one well as it is a hybrid, I think. Some suggest that the gila was before the evolution of the rainbow. The strain of gila also changes from the east to west. Far west=Apache, Far east=gila. Supposedly, there is a lost strain in between the 2. I’m not saying this is the lost strain, but the coloration may change based upon environment. I’m still going with hybrid. Boy do they fight like the dickens! Rainbows jump, cutthroat go deep into current, browns just… yeah, brook flail, and gila trout randomly and quickly dart around in search of cover. They are fast and strong and well worth the trip if you know where to go. Keep in mind these fish may go back to endangered status at anytime with one big fire. Be extra careful if you are allowed fire in the area and take special notice of fire danger warnings. Did I mention high country carp?

Something I didn't expect, but a good change of pace.

Lesson #7: Blow dryers come with a warning label that states, “Do not use in shower”. There are no warning labels in the wilderness that protect you from bad choices.