This is a Tasty Burger!

Nothing says yummy like Samuel L. Jackson. My trip has been delayed yet again, my budget forgot to include a fishing license, so I have to drive 200 less miles to Fenton lake. Before I go though, I thought I would include a life adventure that happened last night. My friend Alex, his wife Casey, and I decided to have a little BBQ. During the summer, this happens at least once a week. It’s quite fun and also hones the skills of cooking and gives me ideas of ways to cook things in the wild.

This particular evening we were making burgers. When I say we, I mean Casey was making fries (which should be world famous), Alex was cutting cheese (in both ways), while I cooked the burgers. Well, Alex had an incident while cutting the cheese (the actual cheese) and sliced his thumb wide open. You can tell the measure of a man by the pain that they receive and their reaction to it. Did they faint, freak out, or remain calm? Not only did Alex remain calm, but after his first aid kit was retrieved by his wife, he began to self-administer the most sterile and well planned first aid that I have ever seen. I really wish that I had the video camera, he could’ve made an excellent training video. 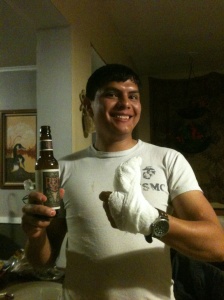 Is it really a good idea to drink and bleed?

After about 30 minutes in bandages, we removed them and the wound was still bleeding. It was under my suggestion and supervision that we superglue the wound together. So, I rummaged through my Fly-Tying kit to save the life of a friend. I figure if he loses his thumb, it is totally my fault.

Next up, the burgers. There are a few ways to make burgers. I’m usually a straight up burger guy, but here is a tip for your next burger adventure. What I did with these is folded salt, pepper, garlic, a touch of balsamic vinegar, and soy sauce. You can add whatever you like to this, but stick to enhancing the flavor of the burger rather than adding flavor to it.  Roughly 2 tbls of liquid to every 5 pounds of beef. Just fold it a couple of times as to not destroy the consistency of the meat, it will look a bit swirly. Next, throw them on the grill and prep a rub. For burgers, I like 7:3:1 ratio. 7 parts chili powder, 3 parts brown sugar, one part salt. The possibilities are endless for rubs as well, just sub in whatever dry ingredients you would like to add for any of the others. Example: 6:3:1:1 or 7:2:1:1, the last one being the combined total of all other dry spices. If it comes out too sweet, add more chili powder or paprika. When you apply this to the burger, remember that there is sugar involved, when sugar burns it does not taste so good. Add rub in the last couple of minutes of cooking to get the full effect. I throw on the buns and whatever I can to the grill as well. Be careful with any oil over an open fire like butter or bacon. Your perfectly heated and resting coals will become a raging unstable fire.

The rest of the night turned out very well and the burgers made me pretty euphoric and stuffed my insides. I had 2 half pounders and felt as though I was going to pop. If you are still concerned about Alex’s thumb, he’s ok. 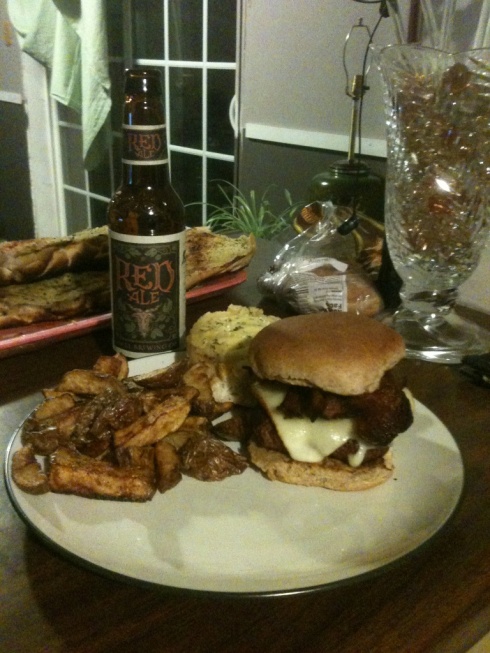