I love to mix flash. Love the reflections, the patterns, the uniqueness, it is amazing. When it came down to it, I realized the tricks of the trade failed to allow any leeway to attain flash freedom. In fact, a quick google search revealed zip, zero, jack of anything mentioning the topic. Aside from laying it all out on the desk to restack it. Well, lemme tell you when you try that with polar flash, have something worthless and breakable handy, cause you are going to throw it. The leading suggested way of tying flash in is to wrap it under the thread while folding it in half. Thus, putting a single wrap of thread in the fold of flash. That’s cool, fine and dandy (even though is has minuscule drawbacks) if you are only using one color of flash. One color is super boring, heck, one texture is worse.

Here is how to do it on the fly instead of a table that you are about to flip. This method also gives you the freedom to put the flash where you want it to go. My personal suggestion it so tie it on top of sturdy/bulky materials so the fly is not fouling up and not between the shank and the point. It is a process involving stacking the flash and folding it back over itself. Although not a true mix, it does combine when moving underwater. After it is all put together, doesn’t look much different anyhow.

Select your colors and think inside out. The first bunch you tie in will fold over to be the outside. In this example, I tied yellow and orange holo flash. You can put the most reflective flash on the inside or add an extra splash of color on the interior and use the reflective colors on the outside. 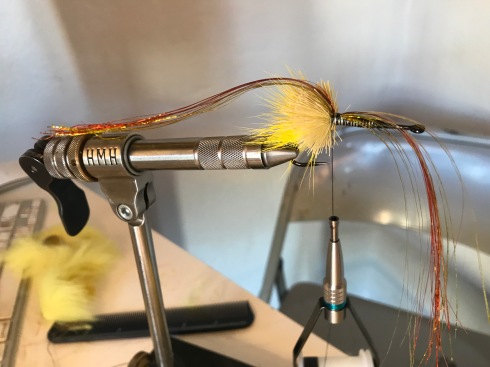 The next set in this example is the glow in the dark orange flash by Hedron. It is stiff and coarse and keeps the flash from clumping together. Leave the front hanging and only use 2 or 3 wraps per clump.

The last bunch to go in was magnum barred clear flashabou. Great stuff, but I tied it on top so that it would be in the core of this flash bundle. I didn’t want it to fully take over. You can see its effect on top here and it becomes a little overbearing.

BUT! When you fold it over it hides well in there. Depending on how much flash you use, you will have a lump. Make sure that when you use a ton of flash like this that whatever material you tie in next does not have to be tied on top and can cover the gap you create. For example; if you tie a brush in next, start in front of the bump.

Whatever you do and whatever combos you come up with, make sure you have fun with it! Enjoy!!!!

This entry was posted on Tuesday, October 30th, 2018 at 3:43 pm and tagged with der helmut, Flash, Flashabou, fly, Mix, muskie, Musky, pattern, stack, technique and posted in Backcountrybugs, Streamer Technique. You can follow any responses to this entry through the RSS 2.0 feed.
« The Real Deal On Streamers